Parents may worry about raising their children bilingual because it sounds overwhelming to teach them their native tongue, while encouraging them to learn another language as well. However, babies are capable and primed to learn languages from an early age. In this article, we present some evidence linked to the development of bilingual children and suggest some ideas parents can put to practice to support their children as they cultivate language skills. 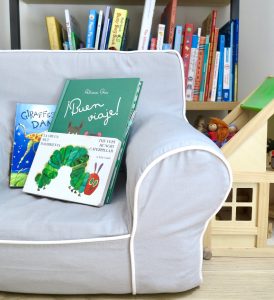 Bilingual language development begins earlier than people might think. A recent study conducted by the Institute of Translational Health Sciences shows that babies as young as 11-months-old who live in a bilingual household show brain activation to sounds from both languages that they are exposed to. On the other hand, monolingual 11-month-olds only show brain activation to the one language spoken in their household.1 The words young children recognize, understand and speak, are built on what they hear.2 That is why language development in children ages 1-2—whether monolingual or bilingual—largely depends on the language input they receive from their environment, such as their home or preschool. As young children tend to spend a lot of time with their caregivers, the language input they receive from caregivers is influential in their language development. Research has demonstrated that a mother’s speech to her 18-month-old baby predicted the baby’s word recognition, expressive vocabulary and  how fast they recognize words at 24 months of age.3-4

Bilingualism may have additional benefits for children aside from being able to understand and speak two languages. From an early age, bilingual babies must learn how to differentiate between sounds from two different language systems, which engages an area of the brain called the prefrontal cortex. Bilingual babies show more activation in the prefrontal cortex than monolingual babies as early as 11-months-old. This area is crucial for what  psychologists refer to as executive functioning, which includes one’s ability to plan, set goals, regulate emotions, control impulses and be organized, among other things. Because bilingual babies are exercising this part of the brain from a very young age, they may practice and hone these skills earlier.1

To encourage bilingual language development, parents can spend time speaking and reading to their babies in both languages as a way to bond with their children. A supportive, loving and enriching family environment is associated with school success for dual language learners. Regardless of the number of languages children are exposed to, one-on-one interaction between infants and their caregivers is essential and promotes language development for years to come.4 With this in mind, speaking with the baby in both languages can help her build her vocabulary. The same goes for reading ability—strong first language reading abilities are associated with strong second language reading abilities, so reading to and with your children in both languages can help them develop their own reading skills.10

Finally, know that having a shared language with your child can be a special bonding experience both now and as your child grows. A study showed that adolescents who mutually communicated in their parents’ native tongue showed more cohesion and discussion with parents than adolescents who did not speak the same language as their parents.11 Language is more than just a collection of letters, words and phrases—it is a way of expressing our experience in the world, a representation of culture and a tool for communication and connection. The way a child sees the world is shaped and affected by the language they use to describe it. While bilingual language development may take longer than monolingual development, it can provide the child with a new form of expression and another way to bond with their family and their culture.

We would love to hear your stories about bilingualism, or answer any questions you may have about language development. Feel free to leave us your thoughts in the comments!

[8] Martin-Rhee, M.M. and Bialystok, E. (2008). The development of two types of inhibitory control in monolingual and bilingual children. Bilingualism: Language and Cognition, 11 (1), 81-93.

[11] Tseng, V., & Fuligni, A. J. (2000). Parent–adolescent language use and relationships among immigrant families with East Asian, Filipino, and Latin American backgrounds. Journal of Marriage and the Family, 62, 465–476.